Is it the attention from women? the black leather jacket? or having millions of dollars in the back that constitutes being an alpha male?
Make no mistake, there is such a thing as ‘alpha’ and ‘beta’ males, but somewhere along the line, our definition of who an alpha male is got lost in translation. 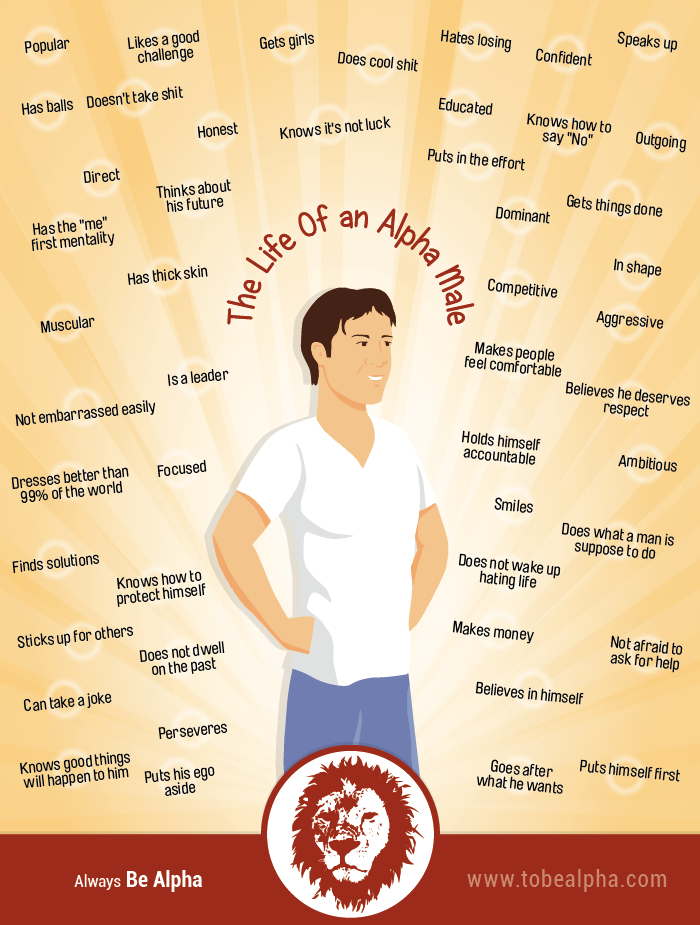 If we are judging based on todays, media crazed, hollywood standard, an alpha male must be the pretty boy in the black leather jacket, who happens to be the captain of the football team, drives a red corvette, and dates the head cheerleader.

WHAT IS A BETA MALE?

The word ‘beta’ means a prototype, or a partially developed form of a desired project or product. Often used in reference to men of low values, beliefs, or sense of purpose, a beta male blindly goes through life never truly believing in himself, never attempts to reach his full potential, and settles for a meager existence.

THE CORE OF AN ALPH MALE

Alpha Males are men whom live from the inside out. Alpha males are aligned with the stronger version of themselves, who is always seeking to express new ideas, makes new friends, and set and accomplish new goals. Whether it be to go to the gym twice a week, learn a new language, or take piano lessons, alpha males are men who seek to make daily improvements.

REJECTION: It Is Not Personal

Success is just a result, and so is failure, nothing more, nothing less, just a result. Whether it be with women, maintaining a workout routune, or starting a new business, alpha males know that no matter the circumstances or setbacks, remaining tunnel visioned, and determined, guarantees success. Persistence is carbon to an alpha males steel, they know that nothing can withstand their strong resolve, so they persevere till they achieve the objects of their desires.

Clint Eastwoods character in the 1967 hit film, The Good, The Bad, and The Ugly, has infamously become the archetype for aspiring alpha males. At first glance, all that appears, is a strikingly handsome, well groomed man, dressed in a poncho, a feminine articule of clothing, but The Man With No Name, as he is refered to, is actually physically and mentally stronger than his dandy appearance suggests.
Just as The Man With No Name felt no need to physically dominate those around him, even when his perculiar appearance made him a target to ridicule and violence, alpha males must also initially retain that same calm, patient demeanor in the midst of people seeking to discredit their character.

The great Sr. Isaac Newton once said “If I have seen further than others, it is by standing upon the shoulders of giants”, a quote that most alpha males embody. A great mentor is enough to shift your learning curve, and take away years of trial and error. Just as Kobe Bryant privately studied, as well as recieved tutelage from his idol, Michael Jordan, alpha males must seek out strong positive mentors to learn from, and piece together pieces of their puzzle .

Alpha Males know that their lifes purpose comes first,
Women are attracted to confident men, and by confidence im not implying swaggering men with boulder sized six packs, and muscles, but rather men whom are moving towards a higher purpose. Men who move to the beat of their own, drum breed confidence, and are notoriously coveted by women.

CONFIDENCE, What Is It Exactly?

We often hear people say, “be confident” or, “fake it till you make it”, but how exactly does one fake something they dont know?
While it is true that confidence is within, it is also a skill that can be cultivated, and developed through deliberate intent, and conscious practice.

HOW TO BECOME CONFIDENT

As human beings over 70% of our communication is non verbal. What non verbal communication means is that while our words are heard, they are not what creates an impact, our physical movements, bodily posture, and facial expressions, are what we use to communicate with the world.
Our mind and body are in sync, which is why a man who stands up straight, speaks with a genuine smile, and makes eye contact, comes across as trustworthy, and self confident, while a man who walks dragging his feet, and slouching, signal low self confidence.